Go green. Save the environment. Earth Day. Concerns over climate change. All of these are becoming more commonplace in everyday rhetoric. It’s less of a trend and more of a way of life for many, including governments and businesses.

Outside of China ($103 billion), no one in the world invests more in renewable energy than the United States, which reached $44 billion in 2015 according to the United Nations, and we project it to grow at 15% to 20% per year. China, alone, aims to spend $360 billion through 2020 on renewable energy like solar and wind, according to its government. While outspending the U.S., China also outproduces the U.S. in terms of greenhouse gasses by two to one.

HASI invests in infrastructure assets like land under renewable energy assets and takes senior positions in the capital stack of renewable projects. Projects and investments can be broken down into three main asset classes: wind, solar and energy efficiency.

– Wind – HASI primarily invests in land that’s leased to wind farms or invests in senior cash flows in the projects themselves.

– Solar – HASI primarily invests in land that is leased to solar farms.

Investments like energy efficiency can make for quick payback with low risk and there are few players in the industry. For instance, the city of Louisville signed a $27 million agreement with Johnson Controls to upgrade lighting, boilers and chillers. Johnson Controls, in conjunction with Hasson Armstrong, will pay the cost up front and the Louisville government will repay them over 23 years through a performance contract based on savings.

Not every holding in a portfolio will be a high flyer. Investors can benefit from identifying underappreciated financials that offer consistency and moderate growth. HASI fits this mold perfectly, although referring to its current growth as moderate is probably a little conservative. The company boasted a top-line growth of 29% in the second quarter as revenues increased to $28.275 million from $21.845 million over the past year. The robust pipeline of $2.5 billion in projects should enable HASI to maintain growth rates in the high teens to low 20s. We do anticipate some top-line moderation simply based on scale.

This is the first Stirling name to pay a sizeable dividend and it’s a welcome addition. Currently, HASI pays a $0.33 per quarter dividend, which equates to a yield around 5.4%. The company is targeting a 2.5-to-1 debt-to-equity ratio, but it only stood at 2-to-1 this past quarter. With a projected pipeline yield of 6.2% and a 54% fixed-rate debt level combined with a paltry payout ratio (dividend paid/net income) of only 28%, the dividend appears secure and has upside over the foreseeable future. A rising dividend also has the potential to push share price higher.

A current view of the portfolio:

The Technical Analysis – Possible Breakout on the Horizon 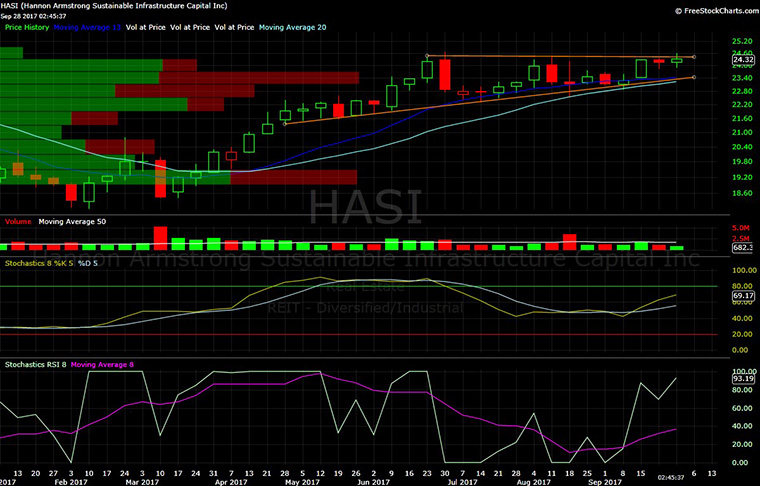 After a strong spring, Hannon Armstrong has traded in an ever-tightening range. Over the course of the summer, shares have developed a higher low while grinding away against a high in the $24.60-to-$25 range. This series of higher lows against a flat resistance level has created an ascending triangle pattern. While this pattern favors the bulls, it doesn’t equate to an immediate entry on the long side.

Our concerns here revolve around resistance and volume. Volume has been underwhelming on moves higher (green bars), while several moves lower (red bars) have often occurred on greater-than-average volume since July. As investors, we’d prefer to see volume drying up during a selloff rather than spiking and then remaining higher. These high-volume selloffs have the potential to create staunch resistance on the way back up. Buyers at the higher levels become prime candidate to sell into a breakeven scenario. Fortunately, we only have two larger-than-average red volume bars, but both contain intraday week highs at resistance.

This $25 level is our focus. Well, $24.60 really. Until HASI closes above those levels, we are not technical buyers, although we are buyers here for fundamental reasons. Instead, technically, we’d focus on the rising support level of $23.40 and begin building a position in the $23.60-to-$24 range and become aggressive buyers on a breakout over $25.

Our initial target on a weekly close over $25, independent of fundamental views, would be a push to $26.60 in short fashion with an ultimate upside of $27.40-to-$29.10 within 12 months. Hannon Armstrong presents a challenge in terms of patience as we expect shares to trade in right ranges, sometimes moving only 1% or 2% per week. Secondary support in the low $20s means a breakdown of support will likely lead to a long entry, but we don’t expect shares to drop under $20 unless we experience a major move in interest rates in a very short period of time.

Catalysts for the Thoughtful Investor on Why Hannon Is a Buy

Goldman Sachs forecasts that by 2023, renewables like wind and solar will be able to operate without government subsidies. As a result, deployment of both should accelerate to $3 trillion over the next 20 years. Currently, of the $44 billion the United States spent on renewable energy in 2015, only a little more than half went toward utility-scale solar and wind projects with the largest solar investment totaling $744 million and the largest wind investment at $560 million. Given HASI’s current $2.1 billion portfolio and $2.5 billion pipeline, of which about 69% is solar and wind, it becomes evident the strong position HASI holds in the industry.

As the shift toward renewable energy accelerates, Hannon Armstrong will likely have its choice of projects, enabling the firm to balance risk and reward to accelerate capital growth as well as maintaining a strong dividend for shareholders.

1. HASI is a leading investor in the sustainable infrastructure markets, including energy efficiency and renewable energy.

2. Government spending on solar, wind and energy efficiency is expected to soar for the next several decades, eventually reaching $3 trillion. HASI’s positioning as an investor in government efficiency projects plus senior positions in land supporting subsidized renewable energy projects position it to capture optimum investments in renewable energy.

3. Hannon Armstrong’s strong, existing partnerships plus it’s foothold in the renewable energy market along with the high barriers to entry have created a sizeable moat separating it from most competitors.

4. In the range of $22.50-to-$23 we like HASI as a long-term buy and hold. Over $24.60, we like HASI as a breakout to the upside. As a real-estate investment trust, the 5%+ yield should offer some price stability even in the face of a moderate short interest (6%) and involvement with a more volatile sector the economy, energy.

Are you a thoughtful investor looking for uncommon investment ideas?

We provide the first two ideas at Stirling Strategic Investor for free. We look forward to providing you uncommon ideas of true value.