The Uncommon Idea in Brief

iRhythm is a digital healthcare company focused on clinical diagnosis of cardiac arrhythmias. The company combines wearable biosensor devices that are worn for up to 14 days along with cloud-based analytics that utilize powerful algorithms.

These algorithms distill data from millions of heartbeats into clinically actionable information. The Zio is a 3-inch patch encasing a chip and two electrodes, iRhythm uses to collect data which produces up to 30,000 pages of information on a patient’s heartbeat.

Four million cardiac tests are run annually. The medical industry is moving away from bulky machines and facility-based testing to wearable tech whenever plausible. The number of annual tests is unlikely to decrease, but the manner in which they are performed will.

-Value: The current estimated market for annual cardiac tests is $1.5 billion. The industry expected compound annual growth rate (CAGR) through 2020 stands around 5%, And iRhythm’s share of the market is only around 5%.

-Best-of-Breed Advantage: Holter Monitors have long been considered the gold standard in the diagnosis of cardiac arrhythmia’s, but that’s no longer the case. iRhythm’s Zio Patch has been noted by the National Institute for Health and Care Excellence (NICE) in the UK as demonstrating a higher diagnostic yield when compared to the Holter Monitor.

–Mover Advantage: Rhythm’s use of Artificial Intelligence creates a first-mover advantage for the company. The company already has millions of pages of patient data inputted to its deep learning platform. This data cannot be artificially duplicated. So, any competitor attempting to mimic IRTC’s model must not only create its own algorithm, but also collect data from tens of thousands of patients to be on par with where iRhythm already sits.

Where is IRTC in all of this?

IRTC is changing the marketplace in terms of cardiac testing. The company is establishing itself at the forefront of wearable healthcare tech. The American College of Cardiology (ACC), American Heart Association (AHA), and the Heart Rhythm Society (HRS) jointly issued a new guideline that recommends the use of cardiac monitors such as iRhythm’s Zio service when evaluating patients with syncope (fainting).

While more expensive than a Holter Monitor, iRhythm’s Zio patch is able to produce 30,000 pages of data on a patient’s heartbeat, which IRTC analyzes and distills into a 15-page report for physicians.

The cardiac test market has been ruled by the wire and box Holter monitor for over a decade. iRhythm’s wireless Zio patch offering introduces the use of artificial intelligence via data base drive algorithms all in a small three-inch patch encasing a chip and two electrodes.

The company benefits from the Federal government as a large percentage of revenue is derived from agencies including the Veterans Affairs Department, the Defense Department, and the Centers for Medicare and Medicaid Services. As its acceptance continues to grow, iRhythm should eat into Holter monitor sales in large, mid-size and small hospitals although ambulatory centers will remain the domain of the Holter monitor.

In addition to growing its customer base, iRhythm recently announced a collaboration with the Stanford Machine Learning Group that has resulted in the development of a deep learning algorithm capable of expert level detection of 14 cardiac output classes including 12 arrhythmias as well as sinus rhythm and noise from artifact. The classifications include Atrial Fibrillation, Atrial Flutter, Complete Heart Block, second degree AV Block and Ventricular Tachycardia.

The data from many million heartbeats propels iRhythm above its competition. iRhythm’s has integrated artificial intelligence into its Zio patch. Each patient equipped with a Zio patch has hit or her heartbeat data uploaded and maintained in a database. Data curated by the IRTC algorithm’s is under the control of a machine-learned capability, so it gets smarter with more data. This improves the time to diagnose and lowers the overall cost of diagnosis. In short, the more often the Zio patch is used, the more useful and more accurate the clinically actionable information becomes from iRhythm.

Despite a cost of $360 vs. the $100-150 for Holter monitors, the improved diagnosis should help physicians avoid recommending less efficient treatments for patients; thereby, making the few extra dollars spent initially a net financial benefit in the long run. Currently, around 80% of insurance companies cover the Zio patch, but as results continue to support the benefits of the patch, it should increase.

In a study of people with atrial fibrillation comparing the Holter monitor versus Zio, physicians changed their medical decisions 28% of the time because of the Zio report. The Zio systems isn’t for everyone though. Because Zio and the subsequent analysis takes places over a three-week time frame (2 weeks for recording data), 1 week to produce a report), the patch doesn’t treat in real-time; therefore, it is not best for someone presenting really worrisome or time-sensitive symptoms.

iRhythm’s strong revenue growth and blossoming gross margins offer an attractive draw for investors seeking companies still in their infancy. The company produced 67% year-over-year growth in the most recent quarter, delivering revenue of $21.4 million versus $12.9 million a year ago.

Gross margins increased to 70% from 64% from the year ago period as well. Gross profits nearly doubled surging from $8.2 million to $15.1 million. The company did lose $4.7M from operations as its operating expenses increased 52%. But this loss was an improvement from the $4.9M in the previous year and necessary to support increasing demand for the company’s product.

Managements guided revenue higher for the remainder of the new fiscal year. Expectations are for revenues of $88 million to $92 million, an increase over previous guidance of $85 million to $90 million. Gross margins were also guided higher by 1% with a new range expectation of 70%-72%. Operating expenses were increased by $2.5 million at the midpoint as the company expands the sales and support necessary for the current growth.

Why the Stock Is a Buy

While the current price-to-earnings ratio is not yet registering anything significant as iRhythm is not yet profitable on the bottom line, it is important to note the company has a strong cash position of $109.40 million in cash, which translates to $4.95 per share.

Furthermore, gross profits have increased from 64% to 70% for the full year even as the company’s sales grew more than 67%. With a total addressable market of $1.5, growth of 50%+ for at least the next five years is a realistic expectation.

Healthy hearts are a medical priority worldwide. Bulky monitors with basic clinical diagnosis are becoming outdated as physicians shift toward So wireless, wearable tech such as the Zio patch. The infusion of artificial intelligence allows doctors and current patients to benefit from all the users before them as iRhythm’s deep learning machine algorithms analyze data from every patient ever in order to offer clinically actionable information. 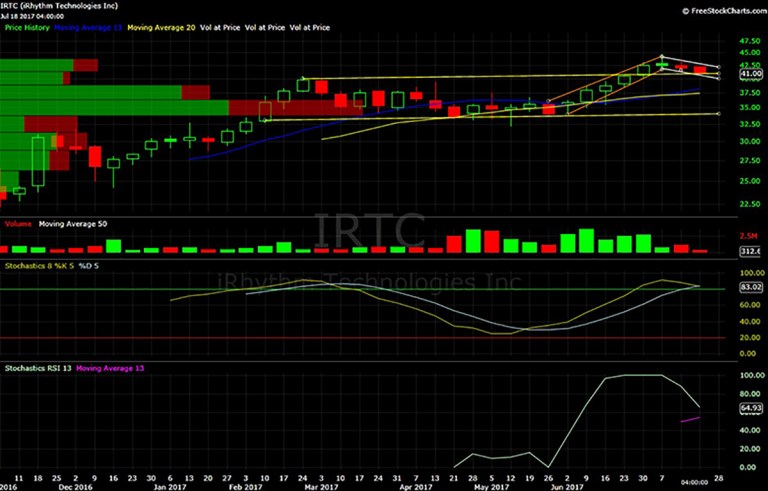 iRhythm is a recent IPO, only hitting the markets in October 2016, so it’s essential to understand the technical picture remains in its infancy. So, all targets and supports levels should be taken with a grain of salt. While they are still useful, the fundamental picture carries more weight. But price action still matters.

After a strong start to 2017, IRTC traded in a wide consolidation channel with support around $34 and resistance around $41. Last month, buyers pushed shares over resistance and the stock almost reached $45 before sellers overwhelmed buyers and pushed price back to previous resistance of $41, which is now our current support.

The question becomes are we seeing a failed breakout or simply a bull flag consolidating the month long move from the end of May to the end of June. That move saw price leap nearly $13 from lows to high, so a pullback of $4 to $5 would not be unusual. In fact, it would be considered healthy as long as we don’t extend the move lower much below $5.

We fall into the camp believing this to be consolidation of the recent move higher rather than a failed breakout. If $41 does fail, the 13-week and 20-week simple moving averages (SMA) should act a new level of support. Both levels have begun to establish themselves as worth watching based on the price action around the SMAs since March.

Traders seeking entry in the current environment should focus on the bullish flag and as well as the consolidation channel. The first approach is to focus upon a breakout from the current flag. A push over $42.50 would be a buy-able breakout although one could easily make an argument the current support level of $41 makes for an attractive entry if it holds.

A split approach appears more prudent where an investor buys half a position around $41, then adds the second half on either the breakout above $52.50 or a pullback in the $36.25-37.50 range. If shares break support of the lower channel, then the bullish thesis, in terms of price action, will be dead.

For those who prefer only buying strength, then a weekly close over $43.00 will get the stock new closing highs. We’d anticipate new high and momentum buyers to come into the stock and push iRhythm quickly higher. Our initial target on a breakout, independent of fundamental views, would be $47.00 in short fashion with an ultimate upside of $51.00 within twelve months. iRhythm offers up a clean channel along with a bull flag setup, so whether focusing on support or a breakout of resistance, the timing for entry should come quickly.

Catalysts for the Thoughtful Investor

The combination of a small, wireless, wearable patch along with artificial intelligence is the future. Holter monitors using ECG leads and wires while the patient is required to wear a box on their belt/waist feels antiquated. In reality, it is antiquated. In the HCB News 2015 report on patient monitors, nearly all the experts agreed wearable tech would replace Holter monitors. Furthermore, Scripps Health conducted a study that found a wearable patch, like Zio, diagnosed 60% of clinically dysrhythmias and had a lower overall cost.

As more doctors and hospitals transition to Zio, the iRhythm deep learning machines (AI) only become more efficient leading to more accurate diagnosis and treatment benefiting all parties involved from patient to provider to insurer.

-iRhythm is an emerging leader in wearable medical devices sector and the digital healthcare revolution.

-A strong base of government clientele plus early penetration into an mature market offer both support to the company’s stability as well as significant growth potential.

-Referring to Holter monitors as part of a mature market is a kind way of saying outdated. iRhythm’s Zio replaces wires attached bulky waist worn boxes with a small, wireless patch that can monitor a patient’s heartbeat for up to two weeks.

-In the range of $38-40 we like IRTC as a long-term buy and hold. Over $43.50, we like IRTC as an momentum breakout long. The small-cap nature, short interest, and new issue nature will make it volatile.

At the time of publication, neither the author nor the company held positions in the stocks mentioned, but positions may change at any time.

Are you a thoughtful investor looking for uncommon investment ideas?

And if you subscribe now, you can get $20 off the the annual price using promo code 20DISCH

Tim and Kim’s first recommendation, Mobileye, was recently acquired at a 34% premium by Intel. We provide the first two ideas at Stirling Strategic Investor for free. We look forward to providing you uncommon ideas of true value.